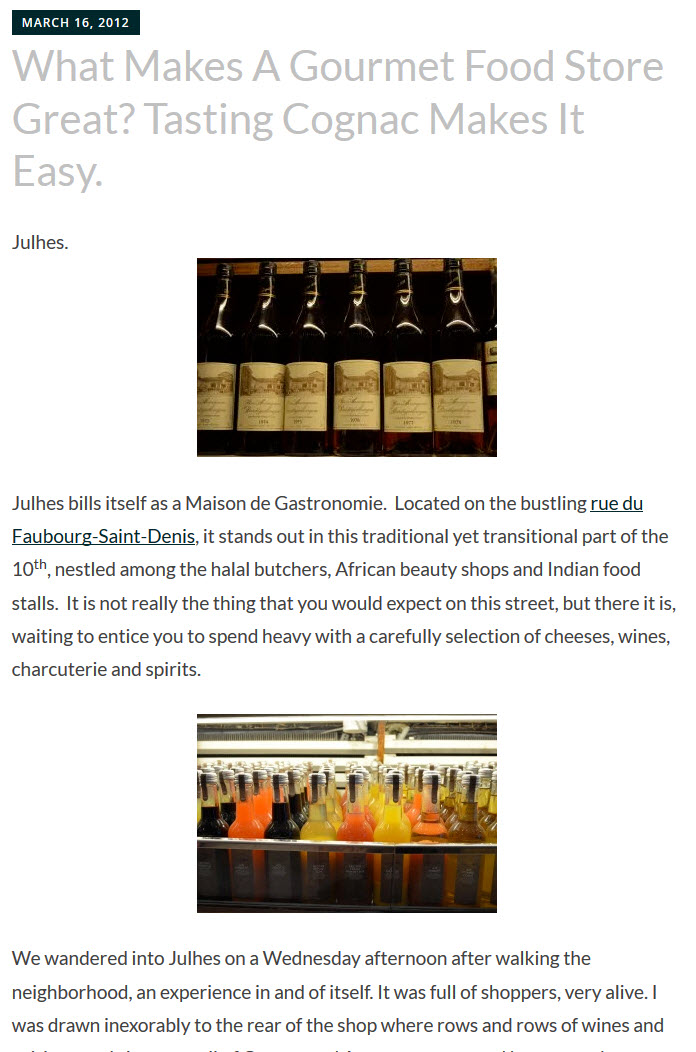 Julhes bills itself as a Maison de Gastronomie.  Located on the bustling rue du Faubourg-Saint-Denis, it stands out in this traditional yet transitional part of the 10th, nestled among the halal butchers, African beauty shops and Indian food stalls.  It is not really the thing that you would expect on this street, but there it is, waiting to entice you to spend heavy with a carefully selection of cheeses, wines, charcuterie and spirits.

We wandered into Julhes on a Wednesday afternoon after walking the neighborhood, an experience in and of itself. It was full of shoppers, very alive. I was drawn inexorably to the rear of the shop where rows and rows of wines and spirits stood.  I saw a wall of Cognac and Armagnac arranged by year and producer that rivaled my previous favorite, the shops at Gallerie Lafayette. But there was something going on that I could not understand.  Many of the bottles were clearly open and some stood as much as ½ empty.

Yet this was not a bar.  This was confusing.

It was about that time that we were approached by a well dressed young gentleman.  He turned out to be Nicholas Julhes, one of the owners of the store. After he explained a bit about his family and how they had founded the shop in the mid 1990’s, I asked him about their cognac collection and why so many bottles were open. The answer was simple, because we are always tasting them with our customers.  Here we are (clearly Nicholas is on the right).

What an idea!  Although it was three in the afternoon this was no time to say no.

We worked through 4 Cognacs and an equal number of Armagnacs in succession. As we tasted them Nicholas explained that they regularly purchase large barrels of aged Cognac from smaller artisan producers and then hold them several years before bottling them.  His current favorite, a grande champagne produced by Jean Grosperrin, this one over 10 years in the barrel before bottling.  What surprised me most about this cognac was how it was powerful yet light and balanced at the same time with lots of fruit.  Again, Nicolas had the answer. He reached out and took out a bottle of the well-known producer Martel and poured a taste for both of us.  As we swirled the dark brown cognac in our glasses he asked me: “What do you taste?”  What I tasted was cloudy, thick and caramel driven.  He went on, “What you taste in Cognac produced by major houses is sugar added during the blending process.  They blend without regard for year or producer and use additives to create a consistent flavor.”

Now I understood why I got those headaches from drinking Cognac all those years. For 35 euro this light amber honey colored cognac had great taste and was a great value as many of Grosperrin’s cognacs sell for much much more.

We finished the tasting with Calvados, a personal favorite due to family history (another story). I purchased a 50cl bottle made by a small batch producer, Christian Drouin from 2006 (26 euro).  We served it at a dinner party last week alongside a dessert of crepes. It was true to its apple fruit heritage, without a lot of dissonant clutter and no burn.

Nicholas talked at length about his passion for food and his store. They also have pasta a shop a few doors up and a second store in the neighborhood and make their own chocolates.  I only wish we would have had more time.  What was clear to me was his deep intuitive understanding of artisan production and local values, thankfully being preserved in France despite the onslaught of commercialization and homogenization assaulting every aspect of the marketplace just as it is here in the US.

And all of this for a tourist who may or may not have the opportunity to return to shop.  Well I did, on my next visit to this gem of a shop later that week to show it to the family,  I purchased several more bottles for gifts.

If I lived in Paris I would be in this shop often, they regularly host tastings of wines, cheeses, desserts, rums, whiskey and on and on.  I will have to settle for less frequent visits but will go back for this is the definition of a gourmet/gourmande experience.
Now if I can only figure out how to get stores in the US to taste Cognac.  That would make for a better world.